Our third morning it was time to say goodbye to Ruzizi tent camp. It was a bittersweet goodbye! Sad because we loved sleeping by the lake and among the animals.  A welcome goodbye because we were going on a game drive to look for the herd of elephants that had been spotted the day before!  It’s safe to say we were the first to breakfast that morning.  Sadly, we didn’t see any.  Another group claimed to have seen 64 elephants less than 24 hours before. I understand it’s a large park, but how do 64 elephants hide from us?! 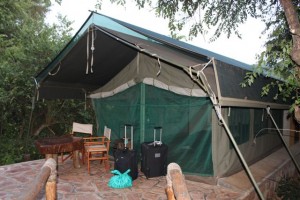 We quickly got over our elephant disappointment when we pulled into an old, rundown soccer field which would host the start and finish of the Girls Fun Run we were about to participate in.  About 50 of the 75 Komera scholars we provide uniforms for were able to attend.  Unfortunately, the rest go to school too far away that transportation wasn’t feasible.  In addition to the Komera scholars, a couple hundred local girls walked over – some quite a distance. 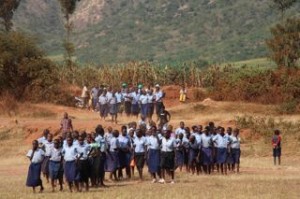 The field was set down from the main road, so we would look up and see large groups descending onto the field. It was an amazing sight, almost surreal.

The girls would then line up to receive their t-shirts. ~100+ girls unexpectedly showed up (which is great news!!) so we ran out of shirts and gave them ours. 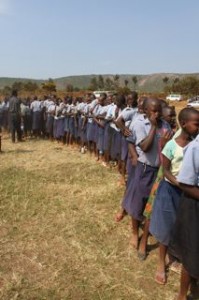 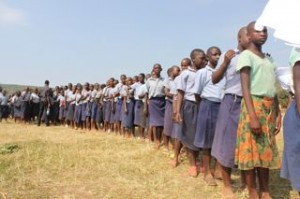 Not sure who was more excited – the girls for being at the run or us for getting to meet all of them! 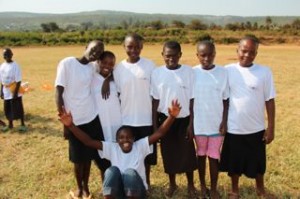 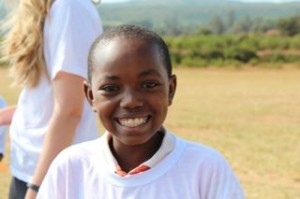 Something we haven’t yet mentioned – the schoolgirls in Rwanda shave their heads because it’s too much work to deal with managing hair for all of them. Makes sense and would have saved my mother a lot of time had that been the protocol at my school.

We were psyched to see some of the parents come out to cheer on the girls: 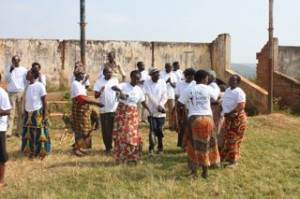 and some younger siblings 🙂 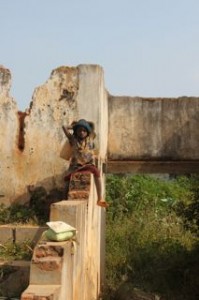 Below is Evelyn, Komera’s social worker that helps with all of the on-the-ground logistics. Evelyn has a huge heart. Not only is she a mother to all of the Komera scholars but has 12 children of her own – she adopted relatives and neighbors after the genocide left them orphaned.  When she speaks, the girls listen. 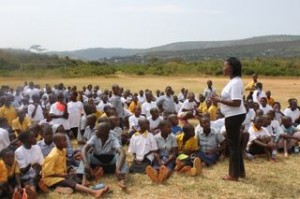 While we waited for the run to begin we formed circles and sang and danced – in Kinyarwanda so we’re not quite sure what we were singing about but it was fun! 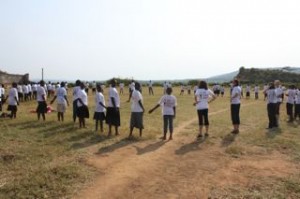 We felt silly in our exercise clothes. Some girls, especially the older ones, brought casual clothes to change into; but for the most part we were surrounded by girls wearing their uniforms, skirts, flip flops, dress shoes – clothes I would normally claim to be unable to run in. 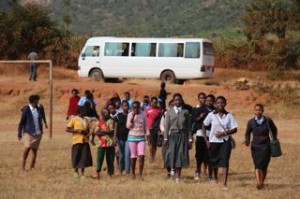 Below is us with the talented and determined Jeanviere.  She had been working on an agenda for the Empowerment Camp and ended up running a huge portion of the program. She was a very impressive young woman and we can’t wait to see her again this fall when she visits Boston! 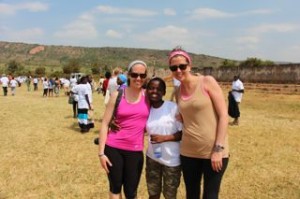 Before we knew it, we were off!! The altitude doesn’t seem like much until you try to exert some extra energy! Luckily it was only a mile. We ran with different groups of girls, saying encouraging things any time we came upon a walker. By the end we were running in a small pack and all finished together.  This was certainly the most emotional run we have ever been on! 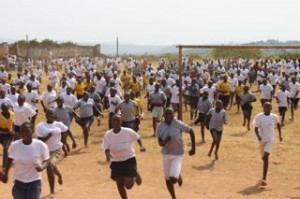 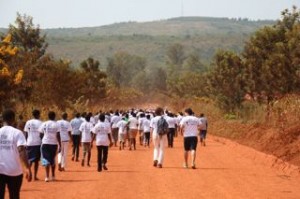 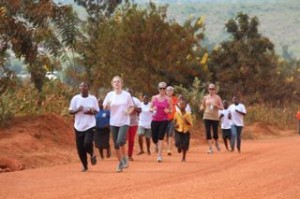 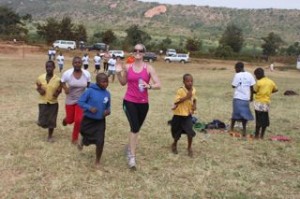 While the red dirt might bother some, we love that it is still caked into our sneakers. Decided not to wash them so we would think of the fun run every time we put them on. 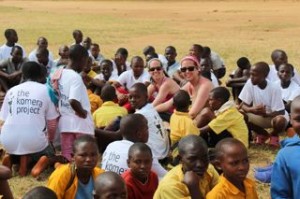 After the run we had lunch in town and then went to the new library for an Empowerment Camp. The girls performed a song and dance, put on skits, we saw an excerpt from Girl Rising, and talked about leadership, goals, determination and having a vision.  At the end we helped hand out certificates for this school year. 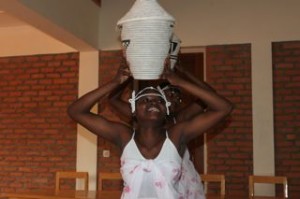 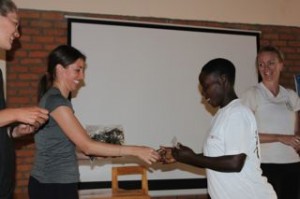 We had handed out pens to the girls at the camp so they could write down their goals. We had about 15 left over and figured we could hand them out to other kids we encountered. When we went outside to get into the SUVs to head back to Kigali, there was a group of about ten kids standing around. We decided this was a good opportunity. Not so much. Ten soon became 20. 20 became 30. They had a sixth sense. Older kids were stealing pens from the younger ones. Little ones were getting upset. We were getting upset! We had none left but they didn’t believe us! We felt bad and then more than ever understood why it’s hard to bring any gift like that into a developing country. Like we learn in grade school – if you don’t have enough to go around, don’t take it out.  We thought we did. Lesson learned. There was one boy, Cedric, who would address me by name and he was a cutie. Naturally, every child captured my full attention. We were about to pull away, our windows were up in the car and Cedric knocked on mine. I rolled it down and he said “Jessica, you give me pen” and held out his hand.  It doesn’t sound very dramatic written out here, but it’s a phrase we will never forget. 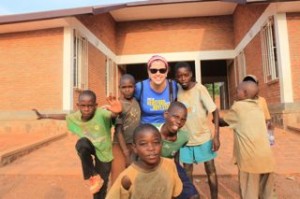 Interesting (and shocking) fact: we learned that university costs about $3,000/year and that covers EVERYTHING. For perspective, the 2013/2014 Boston College tuition is $58,500. We’ll leave you with that, thanks for reading 🙂 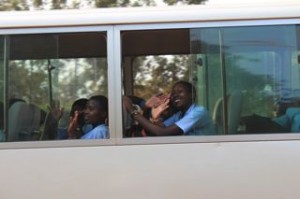